Keep up-to-date with all of the latest Vibrance Network news! 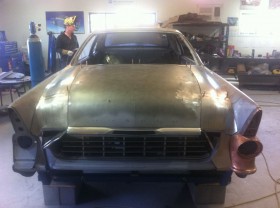 Apart from being a radical idea – never before done in Australia – one big issue with doing the Tail Spin bodywork is that we’re trying to stay true to the original concept drawing which is just in two dimensions and only shows the car from one angle!

It’s important to get the flow and the look right before starting the serious job of fabricating the metal work. A lot of the process we used is actually similar to what would happen in the design studio at the big vehicle manufacturers. We started by doing a ‘mock-up’ to create some fixed points to work from, particularly for the front and rear. Apart from the concept drawing, we don’t have any guidelines so it’s just a matter of continuing to try different setups until it works. For example, once you get the height of the headlights and tail-lights looking good, you can begin to work on the way the bonnet and guards match up to each other.

One of the biggest challenges has been getting the proportions right with the relationship between the grille, the bonnet and the other elements at the front. We used a bonnet (shortened by around 450mm) for the boot-lid and, in theory, we should use an original boot-lid as the bonnet but when we mocked it up it just didn’t look right at all. To get the right appearance we’ve settled on using an original bonnet but moved it forward about 100mm and dropped the nose down. We’re also utilised FB Holden tail-lights (which are now the headlights!) and an EK Holden grille and parking lights which we’ve trimmed and moved inboard.

Basically, we’re creating a one-off car but we’re limited because we’re using production panels and parts. It has taken quite a bit of careful work but we now have a clear direction for Tail Spin to move forward and I think it’s looking pretty good.

Adds a crisp, vivid sparkle effect to the basecoat for a unique, colour-shifting, clear crystal appearance.

Latest From the Gallery